Flushing our way to better Health

Flush toilets get the job done. They also require a network of piped water, sewer and electrical connections, the kind of vast infrastructure developing nations don't have, and likely won't, for years. That translates into a potentially lethal situation for the 2.5 billion people in the world who don't have access to modern sanitation. Last year, the Bill and Melinda Gates Foundation launched the Reinvent the Toilet Challenge, a competition aimed at developing a new generation of Johns, crappers and loos that can capture and process human waste and turn it into useful resources, such as energy and water. The end goal is to improve sanitation in a world where 1.5 million children die every year due to diarrhea caused by food and water tainted with fecal matter.

"Everybody has the right to safe and dignified sanitation," says Sindall, who is funded by the Gates Foundation to manage the testing of the new prototypes. "Nobody wants to go to a toilet that is smelly and dangerous. We are making sure people have access to dignified sanitation regardless of the kind of area they live in," she said. Launching last November's Reinvent the Toilet Expo in Beijing to showcase what researchers had invented, Gates took to the stage with a “beaker of poop” as a prop. “This small amount of faeces could contain as many as 200 trillion rotavirus particles, 20 billion Shigella bacteria, and 100,000 parasitic worm eggs," he said. Some people giggled, he commented later. “But I brought it out to draw attention to a serious issue that kills more than 500,000 people every year: poor sanitation. More than half of the world’s population uses unsafe sanitation facilities. “The pathogens from their waste find their way into the local water supply and make people sick … next-generation, sewer-less toilets have the potential to transform the lives of millions of people,” he told the conference. Gates' interest in sanitation was prompted more than a decade ago when he visited communities where children were playing in lanes filled with human waste, and pit latrines were emptied by hand. Families drank water contaminated with human waste. The stench of community toilets was so bad that people didn’t want to use them.

And the winners are ... The California Institute of Technology earned the $100,000 first prize for designing a solar-powered toilet (pictured below) that generates hydrogen and electricity. 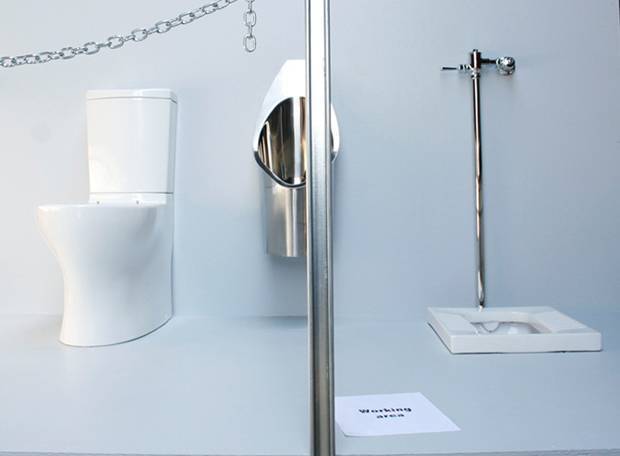 The toilet uses a solar panel to power an electrochemical reactor. The reactor breaks down water and human waste into fertilizer to be used for agriculture, and hydrogen, which can be stored in hydrogen fuel cells as energy. The treated water can be reused to flush the toilet or for irrigation. Loughborough University in the UK won the $60,000 second prize for a toilet that produces biological charcoal, minerals and clean water. The University of Toronto won the third-place prize of $40,000 for a toilet the sanitizes feces and urine and recovers resources and clean water. Eawag, or the Swiss Federal Institute of Aquatic Science and Technology, and EOOS received a $40,000 special recognition prize for their design of a toilet user interface. The toilet challenge isn't over.

The Gates Foundation has awarded grants to four universities to develop the 2.0 toilets for the next round of the challenge. Cranfield University received an $810,00 grant to develop a prototype toilet that removes water from human waste and vaporize it using a hand-operated vacuum pump and membrane system. The remaining solids are turned into fuel that also can be used as fertilizer. The water vapor is condensed and can be used for washing or irrigation. Eram Scientific Solutions Private Limited received $450,000 grant to make public toilets more accessible to the urban poor via the eco-friendly and hygienic "eToilet." RTI International received a $1.3 million grant to fund the development of a self-contained toulet system disinfects liquid waste and turns solid waste into fuel or electricity through a biomass energy conversion unit. And the University of Colorado boulder received nearly $780,000 to help develop a solar toilet that uses concentrated sunlight, direct and focused with a solar dish and concentrator, to disinfect liquid-solid waste and produce biological charcoal that be used as a replacement for wood charcoal or chemical fertilizers. Photos: The Bill and Melinda Gates Foundation